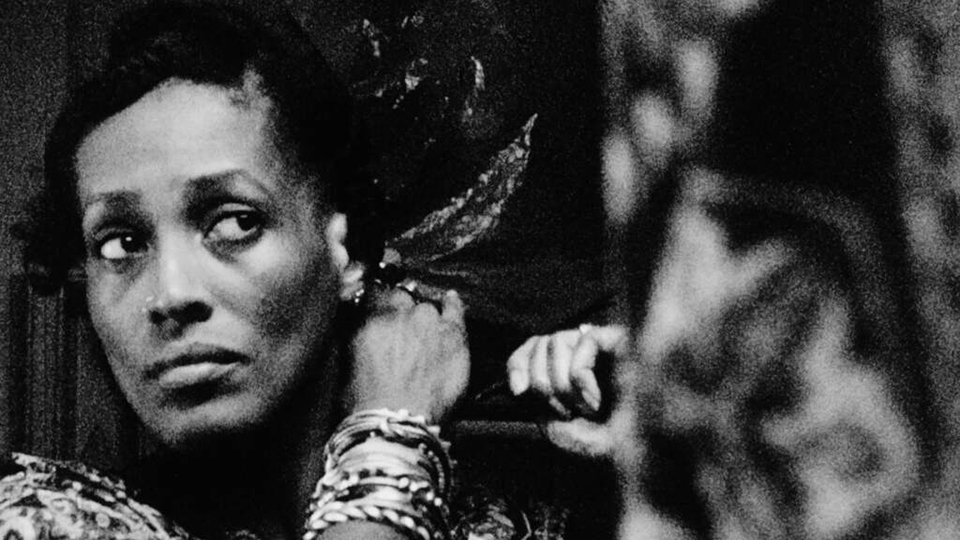 This final program foregrounds Black female interiority. S. Pearl Sharp’s Back Inside Herself (1984) is a visual poem on identity and the assertion of a sense of self, starring the magnetic Barbara O. Jones. In Zeinabu irene Davis’s Cycles (1989), a young woman performs African-based purification rituals as she awaits her period. Visually experimental, especially in its use of stop-motion sequences, the film also features music from throughout the African diaspora, resulting in a unique film language that honors African American women. Melvonna Ballenger’s Rain (Nyesha) (1978), set to a soulful John Coltrane soundtrack, traces the political awakening of one woman. Fronza Woods first short film Killing Time (1979), in which she also stars, is an offbeat, wryly humorous look at the dilemma of a would-be suicide unable to find the right outfit to die in. Aarin Burch’s Dreams of Passion, set in a dance studio, explores desire between two Black women; her following film, Spin Cycle (1989), takes an autobiographical look at Burch’s own love affairs and filmmaking aspirations. Yvonne Welbon’s short film Monique (1991) muses on memory. Reflecting on a childhood experience of racism, Welbon considers how racism is deeply ingrained in the fabric of society, pervasive enough to even inflect or infect children’s play. Cauleen Smith’s Chronicles of a Lying Spirit (by Kelly Gabron) (1989) is a collage of voices, images, and scrolling text that acts as a meditation on Black history and its portrayal in media. Q&A with filmmakers moderated by Yvonne Welbon. (16mm and digital video, 64 min.)

Back Inside Herself courtesy of Cinenovo. Cycles and Rain (Nyesha) courtesy of UCLA Film and Television Archive. Killing Time courtesy of the Academy Film Archive and Women Make Movies. Chronicles of a Lying Spirit (by Kelly Gabron) courtesy of Canyon Cinema.