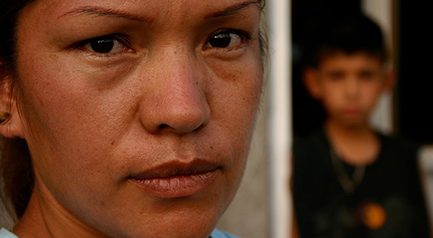 South Side Projections presents the fourth film in a series about undocumented immigrants that is running February through June at locations around the south side. Each screening will feature a panel discussion. The series is sponsored by Contratiempo, the Center for Latin American Studies at the University of Chicago, and the Reva and David Logan Center for the Arts.

As part of a series of a country-wide airport raids in search of terrorists, Elvira Arellano, a Mexican woman working as a janitor at O’Hare International Airport, was arrested and convicted of Social Security fraud. On the date she was ordered to appear before immigration authorities, she took refuge in a Humboldt Park church where she fought to remain in the United States with her American-born son. Despite her 12-month struggle, she was ultimately deported to Mexico in 2007. Columbia College graduate Javier Solórzano Casarin’s documentary narrates the drama of this undocumented mother who has become an international symbol for undocumented workers’ rights.