Interview with director Debra Robinson (I Be Done Been Was Is). 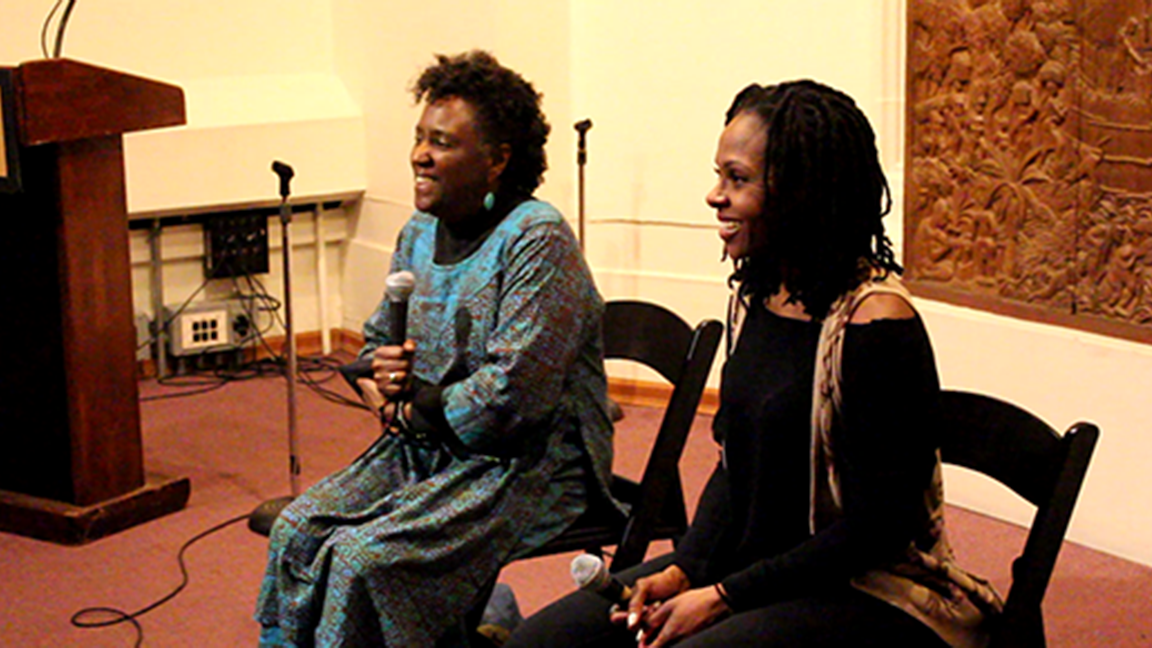 Our events coordinator Zachary Baker-Salmon interviewed Debra Robinson, the director of I Be Done Been Was Is, in preparation for our screening of her film at the DuSable Museum of African American History on March 7, 2017, part of the Margaret Burroughs Centennial Film Series. Read a Q&A between Robinson and Chicago-based comedian Kellye Howard.

Zachary Baker-Salmon (ZBS): Your film has a unique title. Could you tell me about where it came from?

Debra Robinson (DR): The title came from [performer and film subject] Jane Galvin-Lewis’s character, Dr. Q. Anita Biswell. I felt that this character summed up the experiences of a lot of black women, who have to get one degree after another, with constant building and preparation. You have to go so far to even possibly achieve the same things that others achieve without all of that, the degrees, skill sets and what not. It also takes in a bit of history, in terms of the types of degrees that were sought after at particular points in time. In particular the MSW, Master’s in Social Work, was a very, very big degree at one time. Everybody had to have that.

ZBS: Margo Jefferson’s memoir Negroland goes into the MSW thing a little bit. She relates how, growing up among the black elite of Chicago, her mother and all her mother’s friends had an MSW.

DR: Exactly. And so, the words of Dr. Biswell became the title.

ZBS: In addition to Ms. Galvin-Lewis, your film focuses on three other performers: Marsha Warfield, Alice Arthur, and Rhonda Hansome. Could you describe how you came across these women? Did you have a relationship before you conceived the project or did you seek them out?

DR: I knew Alice Arthur years before I started the project. I knew her even before I knew that I would become a filmmaker. I remember when she told me that she aspired to be a comedian. Even then, I couldn’t think of anybody doing that since… Moms Mabley, really. Though there were people on sitcoms, some of them had a history in Black Vaudeville, not stand-up comedy. So, I went with Alice to the comedy clubs for a time. We would go to the club, and she would, basically, take a number to get on the open mic that night. For a while I would just go around with her, which is what turned me on to the comedy scene, I guess. But, at the same time, remember I had not become a filmmaker yet. I was on my way to film school. And later, I realized that I wanted to make a film! All of that came back to me. It was a few years later and I still didn’t know any black women comedians. No one new had come to light. But I knew Alice was still out there, working at it. I started to research the subject, and you know, it’s like when you start to research something everybody just comes falling out of the trees, there were black women everywhere doing comedy. You weren’t hearing about them at all. That’s when I decided to do the film. I identified with that. Even though I was planning on being a filmmaker, it wasn’t as if I had a whole bunch of mentors in front of me.

ZBS: There is a great deal of history in the film. Pearl Bailey, you mentioned Moms Mabley. You present a very thorough context in which we are to understand the careers of these women, and the women who come after them. Did you plan to include the history when you conceived of the film? Or did you realize later you had to put it in there so people can get what you’re talking about?

DR: I did plan on it, from the beginning. It is just like that, nothing comes out of the blue. Everything has a beginning, and there is an evolution to it as well. I wanted a context, and I always appreciate a history. I remember someone telling me “you should just do a popular, entertainment film,” and you know, skip the history and just have them entertain. And for some reason it just didn’t seem right for me at that time. It has to be documented somewhere, that there is a history. We needed a document, at some point, and I felt that I was there.

ZBS: Switching the conversation to performing styles for a moment, three of the women in your film, Alice, Jane, and Rhonda, really throw themselves into their stage characters. Sometimes they’re outrageous, sometimes more subtle, but they mine their characters for comedy. Then you have Marsha Warfield who doesn’t do that. She’s more conversational, and intimate, in a way. What was it like to observe these varied styles of comedy while making the film?

DR: I think it all lines up with their personalities, really. You know a comedian is just the most naked performer. It’s just them; their take on the world, their take on society, their observations. And somehow, they have to convey that, and they have to convey it in a humorous way. Alice had become a born-again Christian, very religious, and she said she always read the news because that’s where she would get most of her material. Then you have Jane Galvin-Lewis. She was very, I would say, sociopolitical. She was able to convey that through her characters. Rhonda Hansome was an actress, an actress who wasn’t getting a lot of work. That was natural for her, to portray characters. Marsha Warfield did not come to it with the intention of being in showbiz. In the film she tells the story of the time her friend put her on the spot at a comedy club, and basically dared her [to perform]. That, to me, is the quintessential comedian. They get up there, they have nothing but themselves, and they begin to weave their story. All four women are in the tradition of comedy, but Marsha didn’t come to it like that. She didn’t come with aspirations of being in entertainment.

ZBS: Ironically, she did end up in entertainment. Marsha had the most success out of all of them being on Night Court and things like that.

DR: Exactly. She’s the one with the most success, if we measure success as being in movies, on television and whatnot. She’s the one. The only black woman that surpassed her at a certain time was Whoopi Goldberg.

ZBS: I’m stuck on what you said about Jane Galvin-Lewis’s comedy being largely sociopolitical. I don’t know if the mainstream was really ready for that in the 1980s, but it seems as though, nowadays, people are more receptive to talking about, making jokes about, things like oppression, privilege, prejudice, etc. Do you feel that there is a natural progression from Jane’s work into present-day, mainstream comedy?

DR: It certainly seems like a lot of the things she was talking about then are so relevant now.

ZBS: It makes me wish I could see the rest of her set [in the film].

DR: Right. Because of course she had the one character, the woman in Queens. The white woman in Queens. That one is really… it’s right-on now. I’ll never forget the line where she said “You know the white people in Manhattan would rather socialize with black people in Manhattan than they would white people in Queens.” I was like, you know, that is a complex statement right there. You’re really getting into class and race in ways that we don’t talk about. I still haven’t really seen that addressed. It would have been something great to address during the Obama administration. I feel it’s part of the reason Trump is coming into office now. She got into class, race, elitism in a way that is not so simple.

ZBS: I believe that Jane even talks about that character in the film, relating that some audience member either didn’t understand or wasn’t willing to acknowledge that she was playing a white woman, in white face. They interpreted it as her wearing cold cream on her face.

ZBS: So, yeah, people really weren’t willing to talk about it then. Some folks were seeing something that’s not even there.

DR: No, no they weren’t. And you know you really hadn’t seen that, until maybe Eddie Murphy in Coming to America. You don’t get into that very often. You would have comedians who would switch, vocally, saying “this is what a white person sounds like,” doing very stereotypical voices. But, to actually put on whiteface? Unh-unh. That wasn’t happening. And to tell you the truth you’re not going to see it now either. Not very much.

ZBS: The subjects of your film didn’t all live and work near each other. You had to travel to meet them and film them. Could you talk a little bit about where you had to go?

DR: I was living in New York. Rhonda and Jane were both in New York. Jane had a nine to five job, and wasn’t so much working at New York clubs all the time. The places she performed she had a sort of connection with. I remember we would meet down near City Hall, because that’s where her place of employment was at the time. Since she wasn’t performing to make an income, Jane wanted to be more selective about where she performed. Rhonda on the other hand was working hard at all the comedy clubs. Male strippers were big at the time, Chippendales and whatnot. So we were out at this one club in Queens that had male strippers and Rhonda would perform there. Apparently you always had to have a comedian opening at the male strip club. Then we went out to LA, where we filmed a performance featuring both Alice and Marsha at Marla’s Memory Lane. Marla Gibbs played the maid on The Jeffersons, and she had a club out there, where we recorded them. After that, Marsha took us to The Comedy Store. That’s a big club for comedians to come through. That’s a stamp of approval, if you can perform at The Comedy Store. She took us to Pasadena…we were really just making the rounds with her. We went to a hot dog place that was a famous stop in LA. So, traveling around with Marsha was just, it was hangin’ out, a lot, and doing interviews. She really was a working comedian. That’s what she did. She didn’t have any side jobs or anything. She was a professional comedian at that point.

ZBS: Last question: Who is the narrator of the film?

DR: That’s Rhonda Hansome. As a filmmaker, I prefer to have things be more organic. Instead of bringing in someone who just does narration to do the film, I always like to have it grow out of the film, if possible. Now, if Samuel L. Jackson or Viola Davis says they’ll narrate, I mean I’ll bow down to that. But if they’re not available, I prefer it to come from within the film.