Robert Lucas will be in attendance for discussion and Q&A after the program. South Side Projections board member and Bronzeville Historical Society director Sherry Williams moderates. 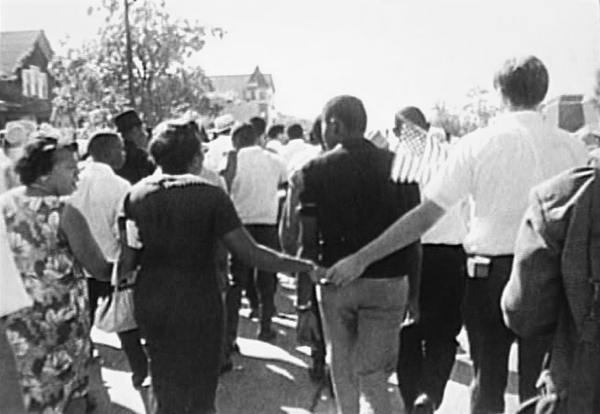 By the 1960s, Chicago had become a battleground in struggles for social change, civil rights, and an end to the war in Viet Nam. Civil rights marchers and the Black Panthers were attempting to redefine the place of Blacks in the United States. These struggles caught the attention of many, including a growing core of documentary filmmakers.

Tom Palazzolo and the Film Group wandered the streets of Chicago with camera in hand, documenting the spirit and complexities of these times. Fast forward to the 21st century when Sherry Williams talks about the legacy of the movement with Robert Lucas in the historic Gerri’s Palm Tavern in Bronzeville. Cutting across decades, this program provides a glimpse of the push-back from African-American communities in Chicago.

URBAN CRISIS AND THE NEW MILITANTS: CICERO MARCH
1966, Film Group, 7 min., 16mm
Robert Lucas, an unemployed African American postal worker, lead 300 marchers across the city line and into Cicero, Illinois. “For an instant,” the Film Group wrote, “the attention of the country is focused on the incredible hysteria created by the sight of blacks marching down the main street of an all-white middle-class northern city.” Shot in blunt cinema verité style, “Cicero March” is raw and relentless, showing the emotional confrontation between marchers and protesters, separated only by a thin line of police and erupting from time to time into scuffles, screams and jibes.

MARQUETTE PARK I
1976, Tom Palazzolo and Mark Rance, 25 min., 16mm
As black Chicagoans plan a civil rights march through all-white Marquette Park, the American Nazi Party prepares to fend off integration and the Chicago police form an ambivalent wall between the two groups. Tom Palazzolo and Mark Rance’s controversial and often misunderstood decision to document the faceoff from inside the white supremacist camp provides a rare glimpse of the passions that integration ignited. Their verité portrait of affable, neighborly folks engaged in spreading hatred is constantly surprising and cumulatively terrifying.

THE DEMISE OF GERRI’S PALM TAVERN
2010, 10 min., Sherry Williams, DVD
Sherry Williams, founder and Executive Director of the Bronzeville/Black Chicago Historical Society, sits down at the historic Gerri’s Palm Tavern with Robert Lucas, former President of the Chicago Branch of the Congress On Racial Equality (CORE), for a casual talk about the legacy of the movement.