Art Worlds of the South Side: The Q&A

Q&A with South Side Home Movie Project archivist Candace Ming, moderated by art historian Rebecca Zorach, following Art Worlds of the South Side at the DuSable Museum of African American History on September 15, 2018. 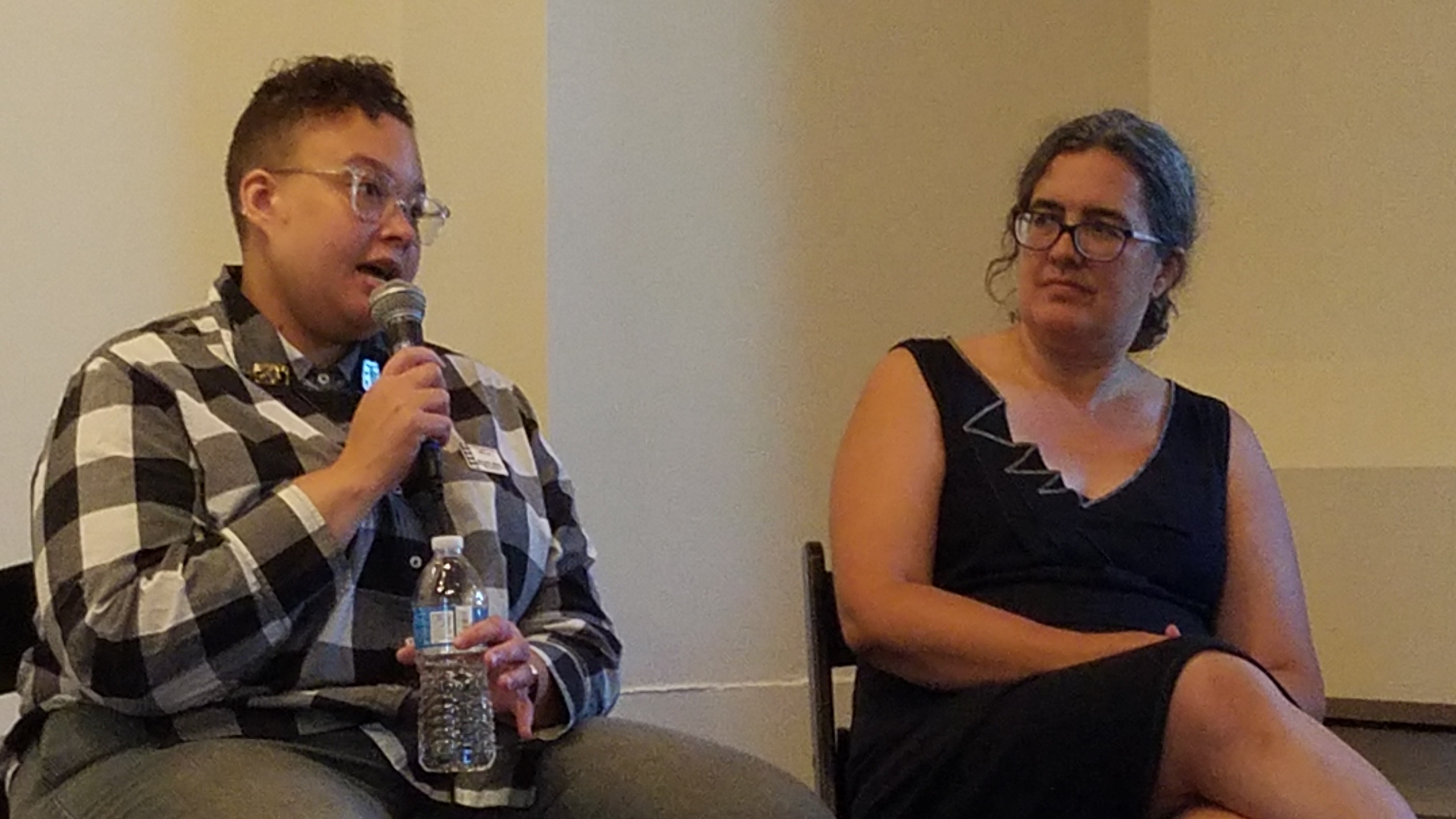 Candace Ming (CM): Yeah, so, that film [“NAACP March” from the SSHMP archives] came to us actually from a collector, not the original filmmaker. So unfortunately I actually don’t know who shot it. But it pretty much chronicles the entire year of events in Chicago in 1963, starting with the memorial march for Medgar Evers.

Medgar Evers was killed—I believe it was June 12th, 1963—and memorial marches were organized by NAACP chapters across the country. I haven’t found a specific date on that, but sometime in June and before July, because the next march you see is the Emancipation Centennial Freedom March organized by the NAACP as part of their 54th annual convention, which was held in Chicago. It started in the Loop and ended up in Grant Park at the old Petrillo Band Shell, which was located in Hutchinson Park, so you can see a bit of the Field Museum, and you saw Mayor Daley, and he actually got booed offstage. [Laughter] Our cameraman actually panned to all the signs criticizing him. And you see Reverend Fred Shuttlesworth, Bishop Stephen Spottswood, who I believe at the time was the chairman of the NAACP, and they are awarding the 48th Spingarn Medal posthumously to Medgar Evers. And the woman in the white hat is Myrlie Evers, his wife. She gives a speech, and you can see her children, and Charles Evers, his brother.

Then it goes to the Bud Billiken Parade, which is probably the longest segment, and the picnic afterward. And then the Halloween footage is actually interesting because it’s from Rosenwald Apartments, which you can tell—I don’t know, he got on the roof somehow. [Laughter] So you actually get a really nice aerial shot of the layout of the Rosenwald Apartments.

And then, also, before that—that’s October, Halloween—October 22nd, you saw some snippets of the Chicago Public School boycott, where you saw my favorite, the car that has “Willis for Trash Collector.” That was October 22nd, then it’s Halloween with the little kiddos, and then I’m not sure if then he ran a bit into spring with the kids doing jump rope after that.

So, yeah, that’s how the film came to us. Oh, and then there’s a segment in there of a men’s club, where they’re eating inside. I’m not sure what men’s club it was, but, yeah, that’s what it was, some sort of banquet for that.

That’s a little about the film. I assume it was a compilation reel that the filmmaker edited himself. When you shot eight millimeter, you ended up with four minutes of material. A lot of our filmmakers in our archive then made larger compilation reels, and this makes sense for him. He said, “Oh, this is all the stuff we shot in 1963,” and he put it roughly into chronological order to make a twenty-eight—it was about a twenty-eight-minute reel.

Rebecca Zorach (RZ): Can you say a little bit about the South Side Home Movie Project?

CM: Oh, yeah. So, I’m the archivist for the South Side Home Movie Project. We collect, preserve, and digitize home movies. This is reel to reel home movies. So, super-eight, eight millimeter, sixteen millimeter film from residents here across the South Side. We’ve got about three hundred films in our archive right now, spanning from the 1920’s to the 1980’s. And we have over twenty-five collections. You can check out our digital archive, which just went online in May. And you can see all the films we’ve digitized. We’ve got postcards and buttons in the back. The postcards have all of our website information on there. And if you have home movies yourself, or know someone who does, come talk to me. All of our digitization services are free.

RZ: Maybe I’ll just say a little bit more. Skyla Hearn, who’s the Chief Archivist at the DuSable, was going to be here, but she had a conflict—she’s actually away at a conference. But she and I worked together on the digitization of the two films which came from Margaret Burroughs’ own home movie collection. We don’t know for sure who shot them, but they were in her collection, which came into the DuSable’s archives, and they had been initially cataloged by the Mapping The Stacks project about ten years ago. So, at some point I was doing research and sort of trying to find out more about what the interior of the DuSable looked like when it was in her home, and came across the finding aid for the collection here, and then approached Skyla about it, and we looked into digitization and had them digitized through the Chicago Film Archives.

And a kind of similar thing happened with the WGN film. I had the idea from talking to some of the members of AfriCOBRA that they had been in a film that was broadcast on WGN in 1968, and so I contacted the archivist there, and what she found was this film—the film that just, the last film that was shown, just the eight minute clip. And AfriCOBRA is not in the film, so there may be another film somewhere that WGN broadcast in 1968 or thereabouts that has more, or maybe this is the shorter version of that. But in any case, that was something that South Side Projections was actually able to have digitized—this segment of it, for this screening.

But I would love to know from anyone in the audience, if you have any particular insights about things that you saw in the last three films, but also the first film, too. Any new information would be great to hear, or just reflections if anyone here visited the DuSable in its original location, what the films might bring back for you. I would just be really curious to hear from anyone. Or any questions that anyone may have for either of us.

Audience Member #1: There is a woman’s picture in one of the films, named Doctor Clara Lites, who’s identified on a card that she was wearing, and she had a parasol over her head. Do you know—does anybody know who that was? Clara Lites. L-I-T-E-S.

CM: A lot of those are floats from the Bud Billiken Parade. So you saw Pekin, you saw Dick Gregory had a float in there. I haven’t done as much research on the Bud Billiken part, but it is actually quite hard to identify every float, and all the people. I really want to identify the lady in the green dress with the crutch, ’cause she’s—and I was mad he didn’t pan over, ’cause you can see she starts dancing right before he cuts away. But yeah, I’m not sure if that was a business, or if she was honored for some reason, you know, I’m not sure.

Audience Member #2: One way of maybe finding the filmmaker would be if there are any records for that art fair, or that art thing. And then I saw a very brief shot of a group called the Lens Camera Club, and other camera clubs in Chicago got regularly, sort of, covered, and noticed—I should maybe say white camera clubs—in the Tribune, and in the newspapers, for their meetings and their gatherings. So in theory, The Defender may have covered the Lens Camera Club, and perhaps this filmmaker was a member of that.

CM: Yeah, and I’ve searched for them. I’m not sure if they changed their name. I have shown this footage to the Washington Park Camera Club, which was established here in 1955, and they were kind of, like, “I don’t know who this is.” I do believe the shot of the guy—there’s a brief shot of a guy in a yellow jumper—I think that’s the cameraman. I mean, I can’t be totally sure, but it would make sense to me that he got a quick shot of himself.

And I also just enjoy showing it because we have found—at the Lake Meadows Art Fair, in fact, a woman recognized herself as an eight-year-old child. And so we did a quick oral history with her about where she lived. She gave me some names as well, and they didn’t really pan out, because she thought that he might have lived in the Lake Meadows complex. I’m kind of leaning more now that he lived in Rosenwald, because he was filming there. But, yeah, I mean there’s a lot of—I’ve tried a lot of angles, and so far nothing has worked.